THIS PRODUCT IS "CURRENTLY UNAVAILABLE" PLEASE CONSIDER THE PRODUCT BELOW 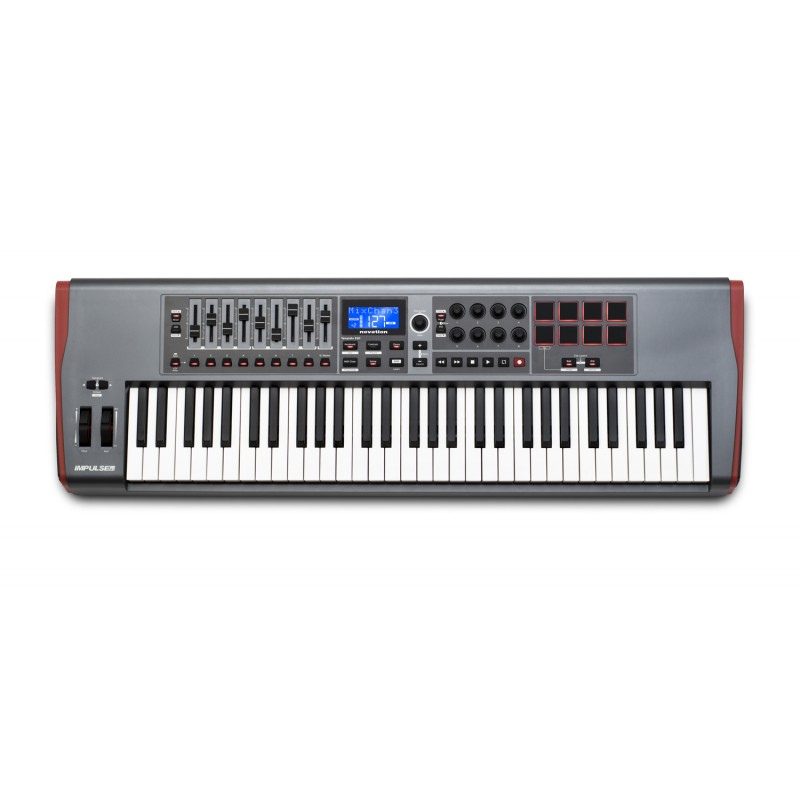 Novation Impulse 61 USB MIDI controller gives you everything you need to control your DAW with expression and precision. At the heart of the Impulse 61 is its highly responsive semi-weighted keyboard with assignable aftertouch.

Three Years Manufacturer's warranty is available on this product.
Products which are under Warranty and having manufacturing defects shall be repaired by
Authorized Service Centres FREE OF COST. Customer shall show purchase-bill (and original
Warranty card, if provided) for availing warranty service. The Warranty is valid within India only.
Please contact us for further information regarding contact details of Authorized Service Centres
for your product.

MONEY BACK GUARANTEE / RETURN POLICY FOR ONLINE SHOPPING AT WWW.RAJMUSICAL.COM

If you are not completely satisfied with any product, return it for a full refund of the product purchase price, full credit, or exchange of your choice. We give you 10 days from the Delivery date.

RAJ MUSICALS only accepts returns made within the first 10 days from delivery.

Should you find it necessary to return any merchandise, it must be shipped within this 10-day guarantee period. All returned items must be in the original packaging complete with all components including the warranty card and owner’s manual and show no signs of wear or abuse.Please pack the item properly, as it was delivered to you, so that there is no damage or dents during return shipment process. Otherwise the return will either be refused or subject to a 15% restocking fee.

Refunds are made for product value only, excluding shipping and handling charges, unless you have received a damaged or defective product. Products received with physical damage must be reported to Raj Musicals within 2 days of the delivery date.

The following items are non-returnable except for defects:

All returns must be authorised and the return shipment must be mailed within 10 days of the delivery of your order.

Please pack the product .properly, as it was delivered to you, so that there is no damage or dents during return shipment process.

Please send your return to:

The refund will be initiated only after the package has been received back at our store at New Delhi.

The refund amount will be transferred, as per banking and payment gateway norms, within five business days of the receipt of the returned shipment at our store.

PLEASE NOTE THAT THIS RETURN POLICY IS APPLICABLE FOR YOUR ONLINE PURCHASES ON RAJMUSICAL.COM ONLY.

THIS RETURN POLICY IS NOT APPLICABLE IF YOU VISIT OUR SHOWROOM, CHOOSE AND PURCHASE THE INSTRUMENT PERSONALLY.

For further information on our guarantees, shipping, and return policies, please contact us.

Novation Impulse 61 USB MIDI controller gives you everything you need to control your DAW with expression and precision. At the heart of the Impulse 61 is its highly responsive semi-weighted keyboard with assignable aftertouch. You get full DAW/plug-in control via 9 faders, 8 rotarys, 8 backlit performance pads, an army of dedicated/assignable buttons and transport controls, and an LCD screen to keep you status-savvy. The Impulse 61 also ships with a tidy collection of cool software and sounds.

The Novation Impulse 61's semi-weighted keybed is first-class. Designed to feel like an instrument rather than a computer accessory, these keys communicate musical expression to your DAW with an efficacy you never thought possible. That's always been the challenge with MIDI and computer-based music creation - and the Impulse 61 attacks it head-on. The result is better music.

In addition to the superb keyboard, the Novation Impulse 61's multi-function, backlit drum pads let you roll beats, warp arpeggios, launch clips in Ableton Live, and curb the potential for mayhem that lurks beneath the surface of every complex DAW setup. And with immediate access to your DAW's transport, mixer and plug-ins, you'll enjoy increased productivity and focus, resulting in, again, better music.

Works with all major DAWS

The Novation Impulse 61 has been designed and tested to work with all major DAWs and plug-in instruments and effects, including Ableton (Ableton Live Lite comes included with Impulse), Cubase, Logic, ProTools, Reason/Record, Sonar (PC only), FL Studio, Studio One, and Garage Band. Automap 4 control software is the magic that gives you immediate hands-on access to your DAW and plug-ins. In addition, you get Impulse 61 access to your 3rd party plug-in instruments and effects, such as Native Instruments, Waves or FXpansion. In Live, you can even control Scene Launch and Clip Launch using Impulse's back-lit drum pads. The Novation Impulse 61 is one serious controller. ₹ 37,172.00 Out of stock
Out of stock
View Details
Filters
Top
Compare 0
Cart 0
Item has been added to your cart